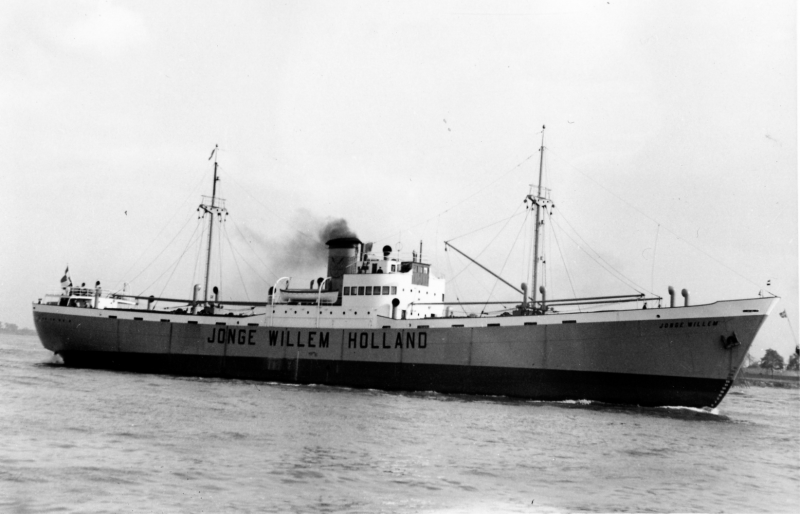 During the depression he was laid off as a junior engineer with Holland America Lijn and found a job sailing for a much smaller shipping company called Middellandsche Zeevaart Compagnie (generally referred to as EmZetCo).

This company focused on cargo between the Mediterranean and Holland. My Grandfather was offered the job, but was told that he would not be provided with an oiler and had to do his own oiling during the watch. As a former blacksmith that was the least of his worries. He liked the trade, and a regular port of call, Beirut, in those days the Paris of the East, was his favorite port of call over his 40 year sailing career.

Maritime pays well, and the steady income meant he and his family were not much affected by the depression. Things started to change during the later stages of the Spanish Civil War where Franco started to interfere with maritime trade along Spanish shores and uninvolved countries were often harassed by German led and supplied naval air forces. Then when the Spanish Civil War settled down in 1939, Hitler started to look for trouble in greater Europe.

Right at that time EmZetCo took delivery of their newbuilt the JONGE WILLEM. She was a typical smaller cargo ship built by A. Vuyk & Zonen in South Holland under BV class. 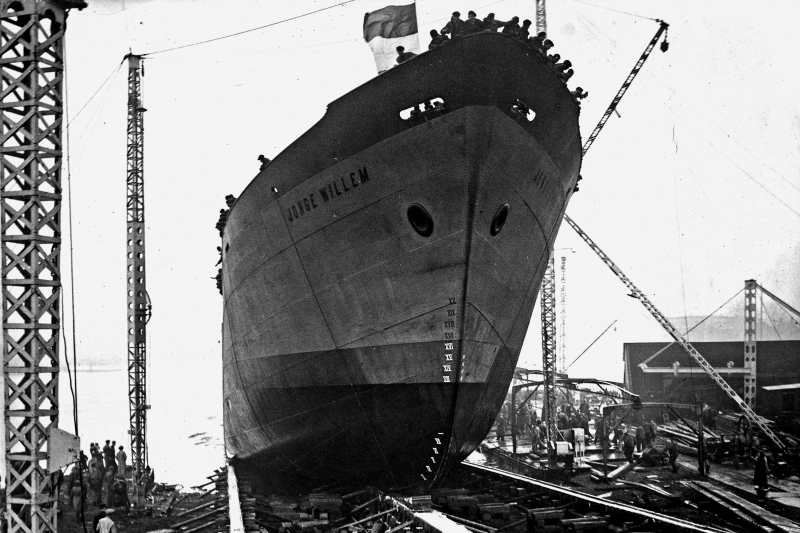 She was fitted with a triple expansion engine of 1500 Hp, but had the fancy addition of a Bauer-Wach LP turbine that significantly improved fuel efficiency. As shown in a sketch made by my father a number of years ago, the LP turbine was coupled to the shaft through a liquid coupling and a reduction gear and allowed the last bit of steam energy to be extracted before the remainder hit the condenser.

The Netherlands hoped to stay neutral and when the war started for real in September 1939, Dutch ships operated under a flag of neutrality and generally had the vessel name and home country painted on each side of the hull and often also a large national flag.

I suppose EmZetCo thought it was cheaper to paint “Holland” on the side rather than the longer official name of “The Netherlands”.

In early 1940, my grandfather was sailing on the JONGE WILLEM. He may, or may not, have known, but on February 26, 1940 EmZetCo sold its vessels to KNSM (Royal Dutch Steamship Company) subject to survey.

On March 5, 1940, the vessel was near the English coast off the Isle of Wight at night, and the crew heard an airplane approach. At first they thought it was a English aircraft and were not overly concerned, but the aircraft dove on the JONGE WILLEM and dropped a bomb that landed in the water and exploded near the bow. The aircraft then returned and made a number of strafing runs on the vessel. Fortunately no one aboard was injured, but soon thereafter the crew noticed a burning ship on the horizon.

They diverted course to render assistance and found a lifeboat with 48 survivors of the passenger/cargo ship DOMALA and an additional 3 survivors clinging to a raft. They also noted various bodies floating in the water. The survivors were brought aboard and the vessel continued to Rotterdam.

By the time the vessel arrived in Rotterdam word had already arrived that the JONGE WILLEM had been attacked. My Grandmother was on the quay when the vessel arrived and almost panicked when she did not see her husband at the rail. The wounded and survivors were first carried off the ship and only then my Grandmother was allowed aboard to find my Grandfather in his cabin doing paperwork. She gave him a proper chewing out. Many years later she would retell the story to her grandchildren in the presence of my Grandfather and told us that Opa was a chicken who was afraid of blood and therefore stayed below deck. My Grandfather never argued with my Grandmother, but I have seen him bleed, and he has seen me bleed in various repair jobs and the only thing I ever saw him walk away from was onions.

In April 1940 the JONGE WILLEM sale to KNSM was completed.

My Grandfather made one more trip and arrived in Rotterdam on May 9, 1940, one day before the German invasion of the Netherlands.  He and the JONGE WILLEM were both in Rotterdam when the city was attacked and destroyed by the Nazis in May of 1940. The fighting had blocked the passage to sea and my Grandfather, many other sailors, and many ships were bottled up in the harbor.

He and his family survived without a scratch, but soon decided to move Groningen, our ancestral home city in the north of The Netherlands. During the war the Germans were keen on getting their hands on mariners and my Grandfather was picked up to sail for the Halcyon line which focused on trade with Sweden, which was a neutral country. He would make a trip when he could not avoid it, but later in the war hid in the northern part of the Province of Groningen (Uithuizermeden), where there was distant family that could provide hiding places on their farms.

My Grandmother was repeatedly interrogated (but not physically harmed) by the Germans. She managed to convince them that she did not know where he was, which was actually true and only my Grandfather’s mother had any idea where he was. She was ailing with diabetes and perfectly willing to take that information to the grave if the Germans became a little too pushy. (As a child I already figured out that her plan was fundamentally flawed, since I am sure she would give up the information if the Nazis started shooting her other family one by one). Towards the very end of the war all German shipping had stopped and the Germans stopped paying attention to my Grandfather.

At the end of the war he was declared a non-cooperator, and on 11 May 1945 was provided with a letter that stated that, so far as known, the Head of the Political Investigation Service in Groningen found my grandfather to be politically trustworthy. 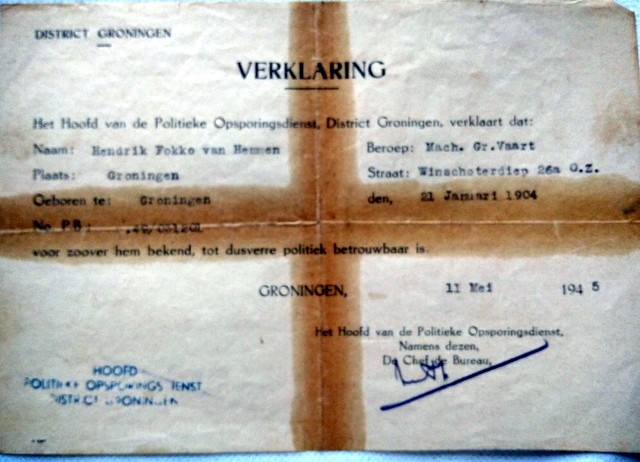 Halcyon Lijn provided my Grandfather with a letter of recommendation that stated that he had sailed on various Halcyon ships between 12 December 1940 and 4 September 1946 as first assistant engineer and that he was known as a skilled and hardworking engineer and is readily recommended. 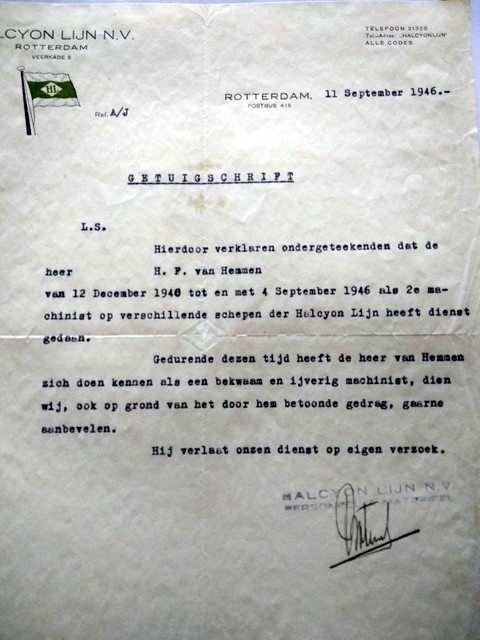 The post war trips to Sweden were very welcome to the van Hemmens suffering significant shortages, since my Grandfather brought in as much food and supplies as he could carry from Sweden including a smoked reindeer once.

After that he joined Oranje Lijn and sailed with them for the rest of his career.

Meanwhile the JONGE WILLEM (actually now the KNSM’s GORDIAS) was found in Bergen, Norway and brought back into the trade by KNSM.

Nothing too heroic, and, as usual, my family was lucky in the face of disaster.

But when you use the internet for a trip down memory lane there is always “a rest of a story”. My mother worked for KNSM in the early 1950’s until she married my father in 1955. So while she worked there, the ship on which her future father in law was strafed was now owned by her employer.

That is just a bit of trivia, but the next “rest of the story” is actually more interesting.

The record is not entirely clear if the JONGE WILLEM was attacked by the German aircraft before, or after, she had picked up survivors. I think it makes more sense that the survivors were picked up after the bombing and strafing run. Based on the available information, it appears to me that the DOMALA was first attacked and when she was well on fire, the pilot went to look for a new kill. He found the JONGE WILLEM, dropped his last bomb and made a few strafing runs for the fun of it and then hightailed it back to his base.

Remarkably, the pilot of the aircraft is known. His name was Martin Harlinghausen and he is sufficiently well known to rate a Wikipedia page. He was active in naval air during the Spanish Civil war and was known as a naval air innovator. His nickname was Iron Gustav and he continued to fly combat mission even as a command level officer. He was awarded the Iron Cross on May 5, 1940 and ended the war as a Lieutenant General. He reportedly was captured by the allies, rather than surrendering and was cleared politically in 1947.  He served in the Bundesluftwaffe from 1957 to 1961. He was generally known as the pilot to have attacked the DOMALA, a British vessel, but I wonder if he would have been allowed to join the Bundesluftwaffe if it was generally known that he attacked a neutral vessel. I truly hope he would not have been cleared if he had attacked a neutral vessel engaged in a rescue operation, and therefore I think it is more likely that the survivors were picked up after the attack on the JONGE WILLEM.  Regardless, it shows that justice after war is generally poorly served.