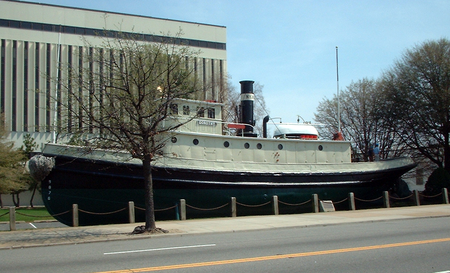 I remember standing at the Newport News Shipyard gate in the 90’s next to Dorothy the tugboat and reading the shipyard’s motto:

“We will build good ships here — at a profit if we can, at a loss if we must, but always good ships”

This motto was apparently coined by Collis Huntington, founder of Newport News Shipbuilding and Drydock, which is now Huntington Ingalls Newport News.

I liked this motto, especially since, at that time, TQM was in its revival in the United States. More remarkably, I did not know until later that Newport News’ motto had actually been used as an example of a proper TQM mission statement in Japan right after World War II.

Whether it is the truth, or whether the motto makes it appear so, there is a general industry impression that Newport News always built better ships.

Undoubtedly, I have always found that Newport News would insist on doing the right thing rather than deliver slip shod work. There is other evidence too; for example the Newport News built ship, Medina, was in ocean service from 1914 to 2009!

Nevertheless, over time, I feel the mission statement can stand some updating.

It could be shorter without changing the meaning:

“We build good ships – at a profit if we can – but always good ships.”

And certainly it would not be wrong to emphasize profit a little more:

“We build good ships with the intent to make a profit, but always good ships.”

Companies that are driven more by marketing may write it as:

But somehow, to me, it does not sound the same, or even realistic. If you are not making a profit would you really be able to motivate yourself to build a superior ship? And, quite frankly, good, for any product, is actually very good. Superior is icing, but rarely makes the world better or the owner richer.

Companies that are really marketing driven may say:

But at that stage I am starting to hear echoes of Bernie Madoff and companies with such lofty missions tend to take very large falls.

However, today, only a few decades later, a proper business cannot function without taking the public into account on issues such as ethics and the environment.

So maybe it could be changed to:

For Martin and Ottaway it could be changed to:

It is not our motto, and, since we are older than Newport News anyway, maybe it is a little late to formally adopt it, but it actually echoes the Engineers Code of Ethics which we have been following quite carefully since its inception and continues to be our moral compass.

These are the fundamental canons of the Engineer’s Code of Ethics:

Engineers, in the fulfillment of their professional duties, shall:

It is written for professional engineers, but if somebody calls themselves an engineer it applies to them. As such, never hesitate to remind engineers of their duties.