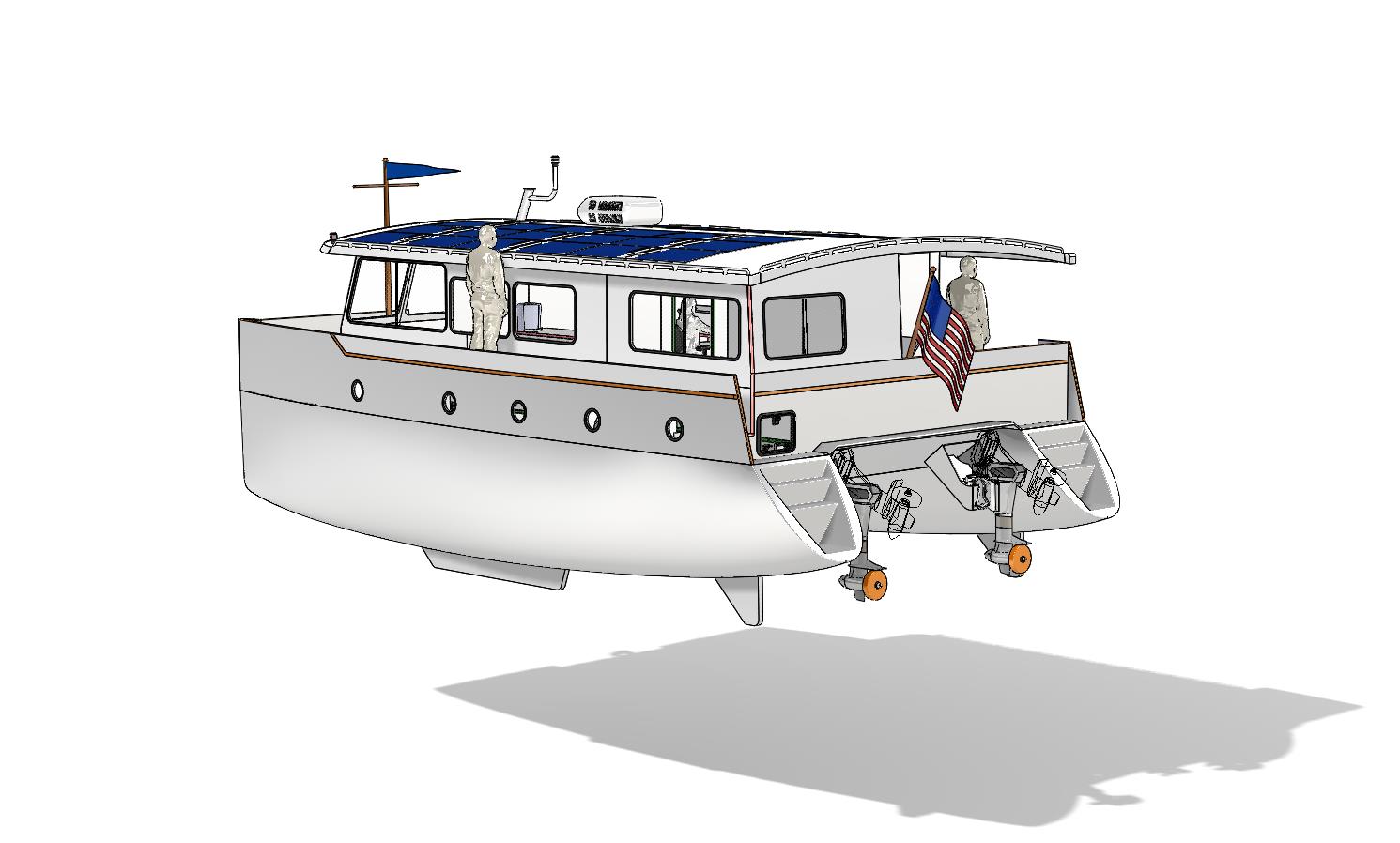 Last summer we were crossing Raritan Bay on Aberration and Abby pondered out loud: “I suppose this boat would be pretty good for the Zombie Apocalypse. If you have to, you can survive for quite a while.”

On long runs it is fun to ponder such things, and it led to a detailed analysis of the advantages and disadvantages of SHEWACs (Solar Hybrid Electric Wheelchair Accessible Catamarans) during a zombie apocalypse.

The main advantage is a high level of self sufficiency. You can get out on the water, anchor somewhere and the solar array will allow you to stay out as long as you want and move to safer realms at modest speed if you have to.

Fishing and marine foraging can add to the food supply and I suppose you can do some hydroponic stuff on the foredeck.

If the diesel tanks are full, safety margins go up for being able to get out of the way of things.

Defense is difficult though. I am not a Zombie fighting expert, but if I were to mount a defensive weapon I think I would like some sort of high powered laser mounted on the roof. I’d probably modify a laser welder, for which I would have sufficient power aboard.

The boat also lacks armor, but I have been told zombies don’t use guns.

I then said that if I were to really design a Zombie Apocalypse vehicle I’d build a sailing catamaran with lots of solar.

Actually, one can charter such a boat in the Virgin Islands , my brother Pim wrote an article about the vessel. It is very self sufficient and very comfortable.

Then our conversation drifted to adding a sail to Aberration again (she started as a sailing catamaran). A conventional rig would not fit and would be too heavy. One option is a kite sail and Aberration is well configured for a kite sail. Kite sails makes sense in theory, but deployment, operation and retrieval are hard work. Moreover, kite sails are open water propulsors and operate best a few hundred feet above the water, where powerlines tend to live. However, on Aberration, a kite sail can be easily installed and deployed from the forward cockpit, and for long hauls to truly find zombie free zones, say in Bermuda, it would be an excellent addition.

A kite sail may be particularly attractive as a pitch damper. On a prior Raritan Bay crossing on Aberration, we had three feet wind driven head seas and the trip was decidedly uncomfortable due to her rapid pitch response. Slowing the boat down a lot worked fine, but when attempting to make decent headway it became difficult to keep the bow bulwark from impacting the waves. I suspect the damping and suspending force from the kite at the bow could alleviate this problem (and motivate me to head off to beat to windward on quartering seas).

I knew that there are various companies working on kite sails and an internet search led me to the Wing-It Wing Commander Kite system. This is a super nifty kite controller for kite surfer style kites.

Sails are like wings in beats and reaches, but downwind they are simply wind catchers. A downwind boat can never go faster than the wind, no matter how large the sails are. Making sails bigger simply allows a boat to approach the prevailing wind speed more closely, but that is it.

However, a kite sail is much more than a windcatcher if it is continually maneuvered in a figure 8, because then it generates more lift in the apparent windspeed it encounters. Therefore, a kite sail is effective both upwind and downwind although a kite propelled boat cannot sail as closely to the wind as a high performance conventional sailboat.

Wing-it developed a fancy kite controller that automatically trims the kite to do everything it needs to do once you set the course including the fancy figure 8 downwind pattern. In other words, you launch the kite, set a course, and the controller does the rest.

This controller is about perfectly sized for Aberration. It weighs about 150 pounds and needs electricity to work (which we have) and can be easily mounted in the bow. The whole set up is probably no more than 250 pounds, which is much lighter than a sailing rig.

Wing-it provided the following performance prediction based on some particulars I provided. 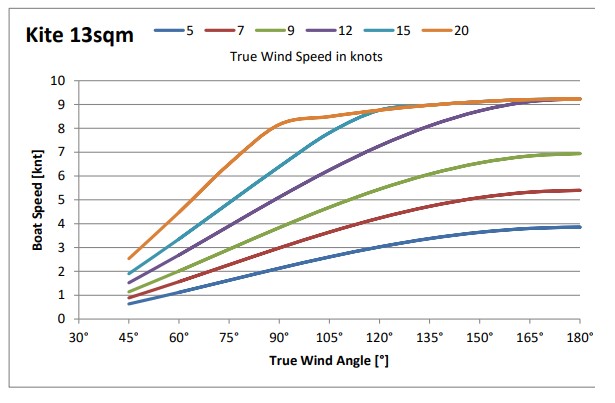 Not bad, 5 knots and more with wind abeam and further aft once the wind speed hits 12 miles per hour.
I would sure love to hit 9 knots and I wonder where it will top out when I turn on the electric drive then.

You can go faster with bigger kites, but 13 square meter is a kite that will pretty much fit in the forward cockpit which is kind of nice for deployment and recovery.

The system is not exactly great for going to windward and I am sure I will have to do a bit of tinkering with control surfaces (Aberration is steered with propellers, not rudders) but it certainly would be a neat system for runs up and down Long Island Sound. In the right conditions it would also be nice to have the props charge the batteries. Motorsailing with the kite would be even more interesting.

The cost of the system is about $30,000. I am too busy taking the lead on that one, but I am deeply intrigued.